Originally published 2/16/22 by and shared with permission from Construction Equipment Guide.

Poking a half mile into Lake Michigan, Navy Pier is one of Chicago's most popular destinations for both visitors and locals. Throughout its history, Navy Pier served as a Navy training center during World War II; welcomed a university and its students; and was a shipping terminal and a tourist hotspot. The site celebrated its 100th birthday in 2016 as a redesigned multi-use location for business, visitors and for its unparalleled views of the Chicago skyline and waterfront. Officials estimate that some nine million people visit Navy Pier annually.

The Navy Pier Flyover project is nearing completion and will enhance the area, making it safer and more accessible for walkers, joggers and bikers. The three-phase project will cost approximately $100 million and was possible only because construction teams embraced unique challenges. Phase one of the project was completed by F.H. Paschen with the second two phases done by Granite Construction's Midwest Civil Division.

"The Lakefront Trail is undoubtedly one of Chicago's crown jewels — a reputation that has only been amplified due to the completion of the Navy Pier Flyover project, which seamlessly connects our north and south sides," said Chicago Mayor Lori E. Lightfoot at the official opening of the Flyover in May 2021. "This incredible project also improves public safety and provides stunning views of our lakefront and Navy Pier for pedestrians, joggers and bikers alike." 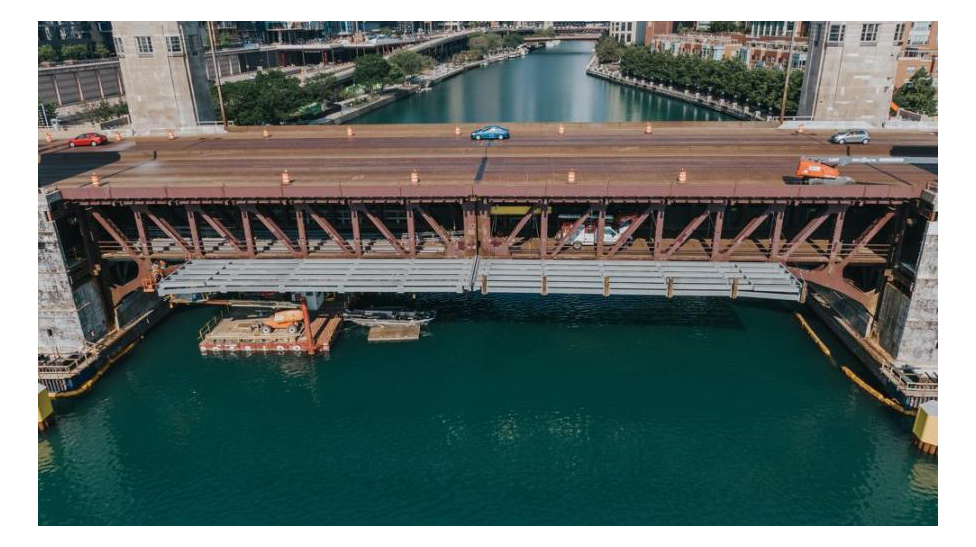 The shape and curve of the spine bifurcation section required complicated rigging and rerigging by multiple cranes to get the unique structure positioned. Finally, traditional bridge-building activities could begin. The Flyover Ramp steers a portion of the pedestrian and recreational traffic onto Navy Pier and other traffic onto the North Lakeshore Drive section of the 18-mi. trail.

"Placing the spine over the water at the Ogden slip was challenging," said Ryan Clark, Granite's regional vice president. "The unusual shape of the spine with its compound curves required us to use a 550-ton crane. Our team had to use multiple lifts then employ temporary hold points to readjust the rigging."

A mistake hoisting this one-of-a kind section into place would have jeopardized the months and thousands of labor hours that went into fabricating the bifurcation spine section. Due to careful planning, complicated engineering and attention to detail, the Granite construction team successfully completed the lifts as planned. The lifts were completed at night to minimize impact on the multiple waterway commercial vendors that operate out of Ogden slip.

"This was a unique project and one we will remember for a long time," said Clark. "We were not the only ones who noticed. People walking the trail complimented us even before it was complete."

At the conclusion of phase 2 of the Flyover project, the trail had been connected in a safe and atheistically pleasing way. However, phase 3 brought an equally difficult test: remaking an iconic Lake Shore Drive bridge originally constructed in 1937. The double-decker bascule drawbridge over the Chicago River presented safety hazards for bikers and walkers using the trail. The 16-ft.-wide trail pinched down to just 6-ft. wide in some places over the bridge causing congestion and a somewhat dangerous path.

Design for the bridge rehabilitation was done by HNTB. 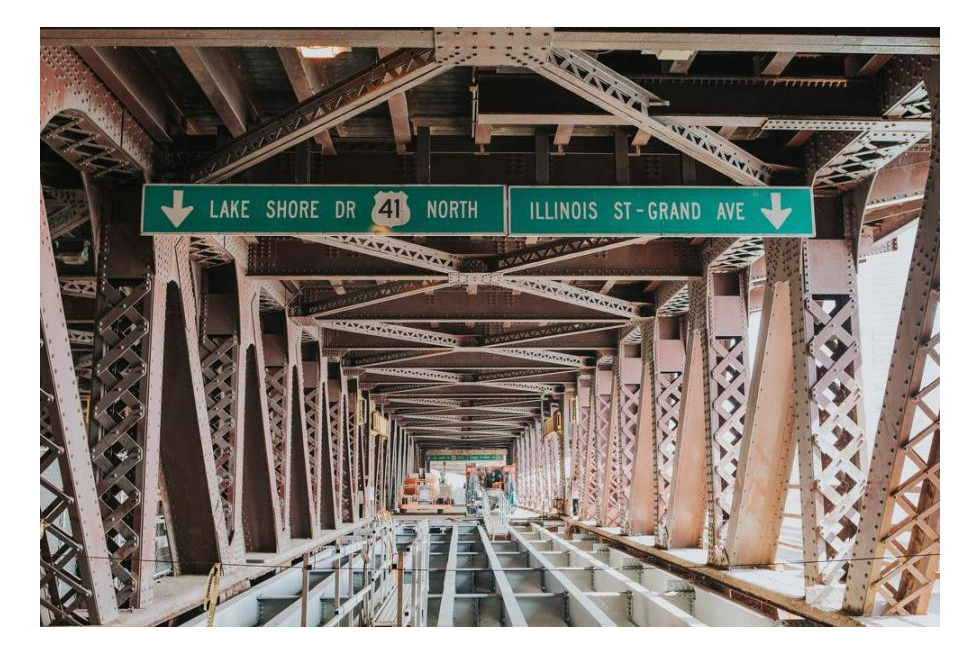 "Sometimes we like to find work that is technically challenging," said Clark of his team of engineers and workers at Granite.

To widen the bicycle path over the bridge, a significant amount of deteriorated steel had to be replaced. The bridge is composed of expanded metal grating supported by steel floor beams spanning between the main bridge trusses. Six lanes of traffic flowed over Upper Lake Shore Drive on the top level and six lanes traveled across the intermediate level of Lower Lake Shore Drive.

The bridge had to remain fully operational throughout construction, not just for the traffic and the trail, but also for the boats on the Chicago River below.

Fixing the bridge tested the ingenuity of Granite engineers and workers.

"Bascule bridges are complex," said Clark. "We had to take apart much of the bridge's mechanisms, then put them together again. Of course, replacement bridge parts from that era are no longer available."

The nature of bascule bridges requires each movable leaf section be well balanced between the "heel" and "toe," so the machinery can lift each leaf. While Granite workers worked on the renovations, they had to make sure not to disturb this delicate balance.

"We had to custom refurbish the center lock drive equipment and the center lock jaw mechanism assemblies," said Clark. "We also refurbished the eight motors that raises and lowers the bridge. We installed 325 tons of new steel on the bridge and retooled the counterweight shoring capacity that weighed 600 tons."

In addition to the steel repairs and the mechanical upgrades, the Granite team crafted architectural restoration on the nearly 100-year-old limestone bridge houses.

"Chicago lakefront parks and trails are among the city's most popular destinations," said Michael Kelly, Chicago Park District general superintendent. "The completion of the Navy Pier Flyover and Lakefront Trail Separation will dramatically minimize congestions, making the experience more enjoyable and safer for everyone."

The final piece of the project is scheduled for completion in spring 2022.

"This project, especially the bridge, is a testament to our people being willing to tackle complex projects," said Clark. "We have a team of young, enthusiastic people from the Chicago area who are willing to put their engineering skills to the test. They are completing a complicated project that will benefit the entire community." CEG