“The incredible teamwork with all our partners throughout the process made this project a success,” says Cindy Nichol, director of airports for the Sacramento County Airport System. “The team effectively and efficiently overcame several unforeseen challenges.”

Originally published by and shared with permission from Airport Improvement.

“The incredible teamwork with all our partners throughout the process made this project a success,” says Cindy Nichol, director of airports for the Sacramento County Airport System. “The team effectively and efficiently overcame several unforeseen challenges.”

At issue was SMF’s deteriorating 8,600-foot asphalt west runway, originally built in 1967 and repaved in 2001. The airport didn’t lose any revenue while it was closed for construction because the parallel runway on the east side of the airfield, also 8,600 feet, was able to handle all of the airport’s air traffic.

Officials at SMF originally hoped a mill-and-overlay project would restore the west runway, but tests revealed weakness in parts of its base layer. So airport staff opted for an all-concrete design engineered by AECOM instead of a concrete/asphalt renovation. The new runway has a 20-year service life, notes Sean Papathakis, an associate engineer at the Sacramento County Department of Airports.

To cure the base-layer deficiencies, AECOM specified lean concrete instead of gravel. Lean concrete is made with a lower cement-to-liquid ratio and typically includes other materials such as reclaimed/crushed concrete and sand.

Prime contractor Granite Construction broke ground in early April 2019 and concluded on Oct. 23 of the same year. An FAA grant paid for approximately 80% of the project, while general airport revenues paid for the balance.

To prevent future operational disruptions, FAA upgraded the approach lighting, installing a system made by NBP Corp. while the runway was closed for construction.

The west runway is critical to operations because it is SMF’s only runway equipped with a Category III instrument landing system. The extra assistance it provides pilots is especially important from about November through March, when thick ground fog regularly socks in the airport and Sacramento Valley.

As such, it was paramount for the project team to hit its October deadline. Running over could have resulted in diverted flights and many unhappy passengers, explains Papathakis, who managed the project.

To speed up the reconstruction process, SMF converted the airside area into a landside work site by fencing off the runway and associated taxiways that feed it. That decreased the level of security requirements—particularly badging requirements for all construction personnel.

“Given the number of workers involved, it would’ve been a hardship on the contractors to get all those employees badged and through the system,” explains Mark Fantozzi, Aviation Group project manager at AECOM. “The tighter security protocols would’ve been detrimental to contractors working efficiently. There still were security protocols, but they were far less restrictive.”

With the new fence boundary, vehicles and employees were able to access the construction site from the west side of the airport, without having to pass through airfield operations. The strategy saved contractors time and money they would have otherwise spent on the associated badging process. It also enabled the airport to keep the rest of the airfield open by eliminating a steady flow of vehicles that otherwise would have driven through airside operations.

“We didn’t calculate the time we saved by doing it this way, but we know it definitely allowed much more flexibility and helped expedite the construction schedule,” says T.J. Chen, deputy director of planning and development for the Sacramento County Department of Airports, which oversees operation of SMF and three other county-owned airports.

Granite Construction surmounted several unwelcome surprises that threatened to delay the project. First, crews performing earthwork discovered that much of the existing conduit contractors planned to reuse—Orangeburg pipe made of wood pulp and hot pitch—had collapsed.

Moreover, other sections of conduit were made from cement mixed with asbestos fibers, which pose environmental hazards.

In addition, contractors found that the runway’s existing blast pads, which were scheduled for repaving, needed to be fully rebuilt instead. “We ran into some soft, unsuitable sub-grade conditions on the blast pads on both ends of the runway,” says Steve Lynch, a project manager at Granite Construction.

Together, the surprises encountered during site prep added about $4 million to the project cost, but ultimately didn’t torpedo the final deadline. Papathakis credits AECOM and Granite Construction for their flexibility and quick thinking.

“Rather than let that hold up our schedule, we just temporarily postponed that work and pivoted to another part of the project,” Lynch explains. “It helped tremendously that the airport and designers were great partners. If we ran into unforeseen problems, they were all over it to get answers to help us proceed.”

To support SMF’s sustainability goals, Granite Construction used 2,400 cubic yards of asphalt millings and 4,500 cubic yards of base rock made from the concrete underneath the old runway to rebuild the blast pads.

Moreover, 100 percent of the base rock removed from the old runway was put back into the structural section and shoulders of the new runway, according to an airport news release.

Proving that not all construction surprises are bad, tests revealed that existing sub-base material under the old runway was stable enough for contractors to reuse. Not having to replace it saved time and money, notes Fantozzi.

“In a reconstruction project, you usually have to excavate down to the subgrade (soil), which could be 30 to 36 inches deep,” he explains. “It takes time to remove it all and put something back in.

“But we were able to preserve the sub-base material, which reduced the amount of runway rebuilt without jeopardizing the performance of the pavement.”

Planning for the project began in 2016 and included several components. For example, Fantozzi notes that AECOM phased the paving and electrical work for maximum productivity.

“Quite a bit of the electrical work occurs before the concrete paving,” he explains. “So when developing a paving plan, we worked with the contractor to ensure there was enough time to get the electrical group far enough ahead of the paving group so they didn’t interfere with each other.”

Scheduling installation of the in-pavement runway lights posed a challenge because crews cannot install all of the light cans at the same time. “They run long-ways down the runway as well as transversely, but you can’t block access for trucks or block the track grade that guides the paving machine,” says Lynch. “So we work out a sequence before the job starts.”

He compares the process to assembling a puzzle while the pieces constantly change shape. “Pavement cure-times change and unanticipated access constraints and other wild cards tend to pop up on these kinds of projects,” he explains. “What looks simple on paper can become quite a fun challenge on the grade.”

Jaquith Industries Inc. made the base lighting cans.

Granite Construction used robotic surveying systems from Trimble to shave time off the grading and paving portions of the project. Known as “total station surveying,” the advanced technology is designed to help contractors meet extremely tight tolerances for grading and paving elevations. At SMF, crews had a quarter-inch allowable tolerance.

“It’s extremely important to hit the grade elevations at each level, and using this technology helps us get there,” Lynch remarks. “We install these units on graders to finish the soil levels, then install them on our paving machines.

“They communicate directly with the total stations, which tell them what the finished grade elevation needs to be, and the machines then install at that grade.”

After the pavement is poured, Granite crews use a machine called a profilograph (from Surface Systems & Instruments Inc.) to measure how well the paving machines performed. As the profilograph rolls down the runway, it provides a reading of how much the pavement fluctuates up and down per mile.

“When unforeseen conditions arose, we collaborated with the contractor to determine the most efficient way to correct the problem and still meet FAA standards,” Fantozzi says.

Lynch points out that no matter how much planning occurs, unforeseen problems can still emerge to challenge even the best “what if” contingencies. “At that point, it’s important to increase resources on a project and also be flexible,” he says.

“Everyone came in with a can-do attitude and a high level of collaboration and partnership,” adds Chen, noting the project won awards from public works and construction industry organizations. “Communication between AECOM, Granite and the FAA was excellent, both vertically and laterally.

“We couldn’t have completed the project successfully without our partners,” he reflects. “We knew it would be complex and challenging from a time perspective, so we all worked hard together to understand the goals and objectives. We really appreciated having these partners on board.” 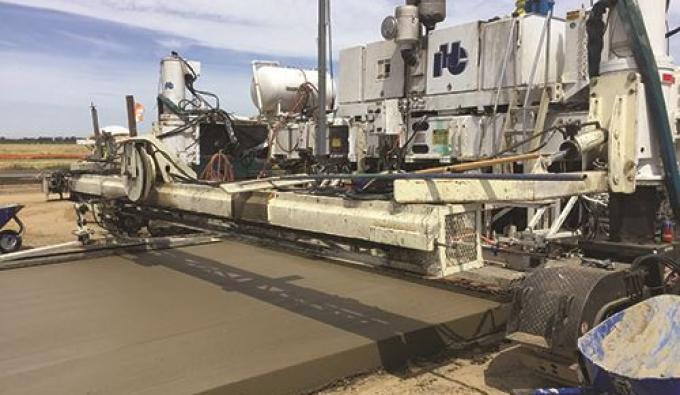 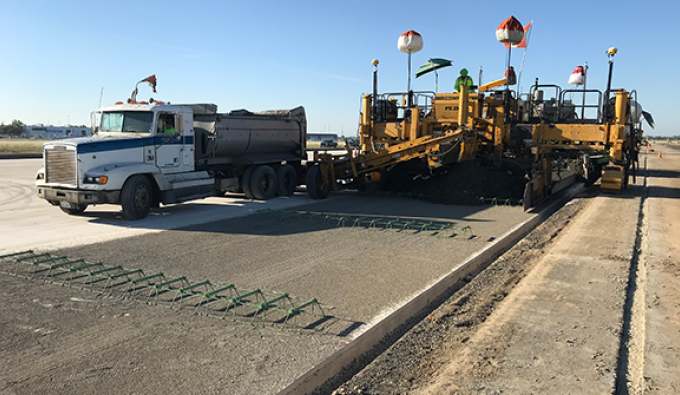 “Everyone came in with a can-do attitude and a high level of collaboration and partnership,” adds Chen, noting the project won awards from public works and construction industry organizations. “Communication between AECOM, Granite and the FAA was excellent, both vertically and laterally." 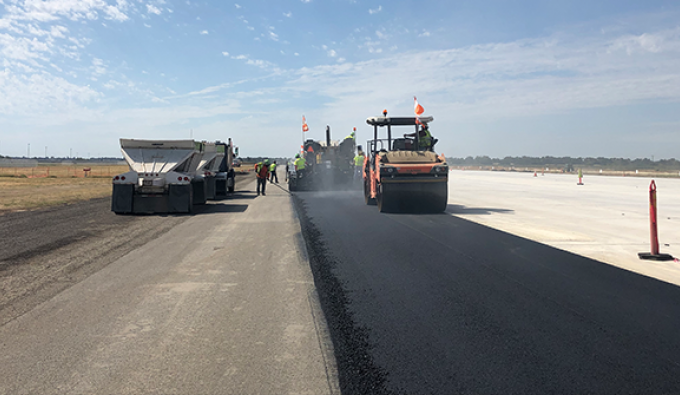 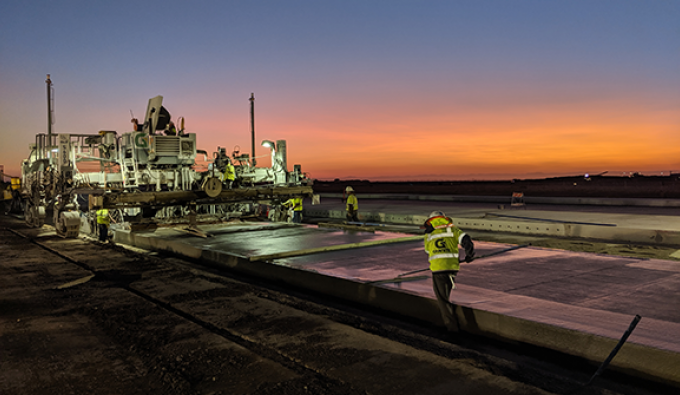